We are excited to welcome back one of our favorite local authors, Mark Warren for a book launch of his newest book Westering Trail Travesties, five little-known tales of the Old West that probably ought to a’ stayed that way.  There will be door prizes, give aways and a special guest. The event is free and open to the public.

A special Guest from Booth Western Art Museum will be here to speak about the museum and Wild West History Association.  The Booth Museum, in association with the Smithsonian Institution, is a 120,000 square foot museum located in Cartersville, Georgia, where guests are invited to See America’s Story through contemporary Western artwork, a Presidential Gallery, a Civil War art gallery and an interactive children’s gallery. Open since August 2003, Booth Museum is the only museum of its kind in the Southeast and was named 2020, 2021 and 2022 USA Today’s 10Best Peoples’ Choice Award for best art museum in the country and 2016 Escape to the Southeast Travel Attraction of the Year from the Southeast Tourism Society.

Within his five distinct novellas, Warren (Song of the Horseman, 2021) develops a cast of memorable characters wandering through America’s wide-open spaces: a smug Boston greenhorn floundering through Kansas; an Arizona ranger prowling around Odessa, Texas, pondering a morally questionable arrest; a weary, wayward woman given a chance at redemption on the Nebraska prairie. But it’s Kid Concho, the picaresque protagonist of “Rumors from the Edge of the World,” who steals the show. The plot is outlandish (Kid Concho and his crew visit a mountain-top spring, which displays visions of the future on its rippling waters; they proceed to misinterpret the images to disastrous effect). The malapropisms are groan inducing (translating shoo-in as moccasin-in to an Apache woman). Even though Kid Concho is an exaggerated outlaw, Warren emphasizes the character’s delicate personal touches, like his beautifully stylized signature. Warren doesn’t shy away from moments of tragedy—even deaths ostensibly written as comedic are still tinged with sadness. Warren’s decision to end his book on an ambiguously hopeful note is distinct and appreciated. 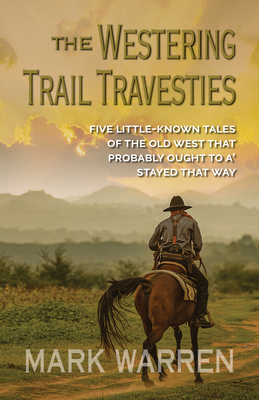 The Westering Trail Travesties: Five Little-Known Tales of the Old West That Probably Ought to A' Stayed That Way (Hardcover )