Along with a talk and signing there will be giveaways for those who attend and drawings for doorprizes.

November is “Native American Heritage Month” and an apropos time for Mark Warren’s newest book to debut. In this novel, Song of the Horseman, Warren explores the racial divide between Cherokees and whites in 1940’s Southern Appalachia as America prepares to go to war.

Warren’s half-century career as a teacher of Cherokee history, crafts, medicines, foods, and survival skills has equipped him well for rendering his two protagonists: one a full-blooded Cherokee horse trainer . . . and the other his one-quarter blood grandson. Their separate journeys would seem to make this two-books-in-one, until their paths intertwine to create the one larger story that the reader is destined to carry away.

Brief Synopsis: A burned-out high school history teacher loses his job, marriage, and self-esteem, which leads him on a journey to reclaim the heritage of his Cherokee grandfather.

Mark Warren is a graduate of the University of Georgia. At Medicine Bow, his school in the Southern Appalachians, he teaches nature classes and survival skills of the Cherokees. The National Wildlife Federation named him Georgia’s Conservation Educator of the Year in 1980. In 1998 Mark became the U.S. National Champion in whitewater canoeing, and in 1999 he won the World Championship Longbow title.

Warren has written extensively about nature for local and national magazines. He lectures on Native American history and survival skills, and Western Frontier History presenting at museums and cultural centers around the country. His Wyatt Earp, An American Odyssey trilogy was honored by WWA’s Spur Awards, The Historical Novel Society and the 2020 Will Rogers Medallion Awards under the original hardback editions, Born to the Badge (2018) and Promised Land (2019.)

His published books include: from Lyons Press, Two Winters in a Tipi and Secrets of the Forest (a four volume series on nature and primitive skills), from Five Star – Gale Cengage and Two Dot, Wyatt Earp, An American Odyssey (an historical fiction trilogy on the life of Wyatt Earp), from Five Star – Gale Cengage, Indigo Heaven and The Cowboy, The Librarian and the Broomsman from the anthology Librarians of the West: A Quartet and from Speaking Volumes, Song of the Horseman and Last of the Pistoleers. 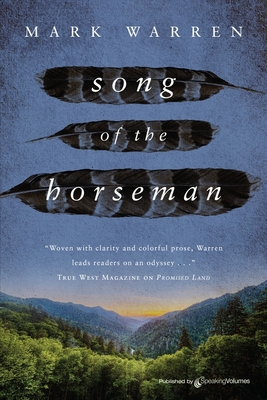 Song of the Horseman (Paperback )