Dave Trumbore, science writer, animator and editor of Collider will be presenting a lively workshop on The Science Of Breaking Bad.  Tje workshop is based on the book with the same title, that he co-wrote with science expert of Breaking Bad.  Dave will take us through famous scenes from the show and conduct fun experiments.  Don't miss this Walter White meets Bill Nye the Science Guy experience.  Unfortunately there will be no meth, but be ready for some rock candy!

All the science in Breaking Bad, from explosive experiments to acid-based evidence destruction, explained and analyzed for authenticity.

Breaking Bad's (anti)hero Walter White (played by Emmy-winner Bryan Cranston) is a scientist, a high school chemistry teacher who displays a plaque that recognizes his “contributions to research awarded the Nobel Prize.” During the course of five seasons, Walt practices a lot of ad hoc chemistry, from experiments that explode to acid-based evidence destruction to an amazing repertoire of methodologies for illicit meth making. But how much of Walt's science is actually scientific? In The Science of “Breaking Bad,” Dave Trumbore and Donna Nelson explain, analyze, and evaluate the show's portrayal of science, from the pilot's opening credits to the final moments of the series finale. The intent is not, of course, to provide a how-to manual for wannabe meth moguls but to decode the show's most head-turning, jaw-dropping moments. Trumbore, a science and entertainment writer, and Nelson, a professor of chemistry and Breaking Bad's science advisor, are the perfect scientific tour guides.

Trumbore and Nelson cover the show's portrayal of chemistry, biology, physics, and subdivisions of each area including toxicology and electromagnetism. They explain, among other things, Walt's DIY battery making; the dangers of Mylar balloons; the feasibility of using hydrofluoric acid to dissolve bodies; and the chemistry of methamphetamine itself. Nelson adds interesting behind-the-scenes anecdotes and describes her work with the show's creator and writers. Marius Stan, who played Bogdan on the show (and who is a PhD scientist himself) contributes a foreword. This is a book for every science buff who appreciated the show's scientific moments and every diehard Breaking Bad fan who wondered just how smart Walt really was. 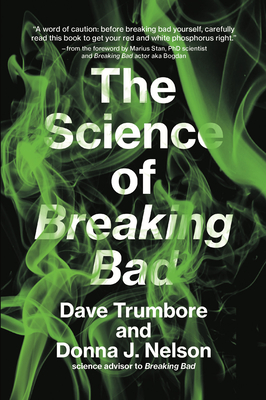 The Science of Breaking Bad (Paperback )